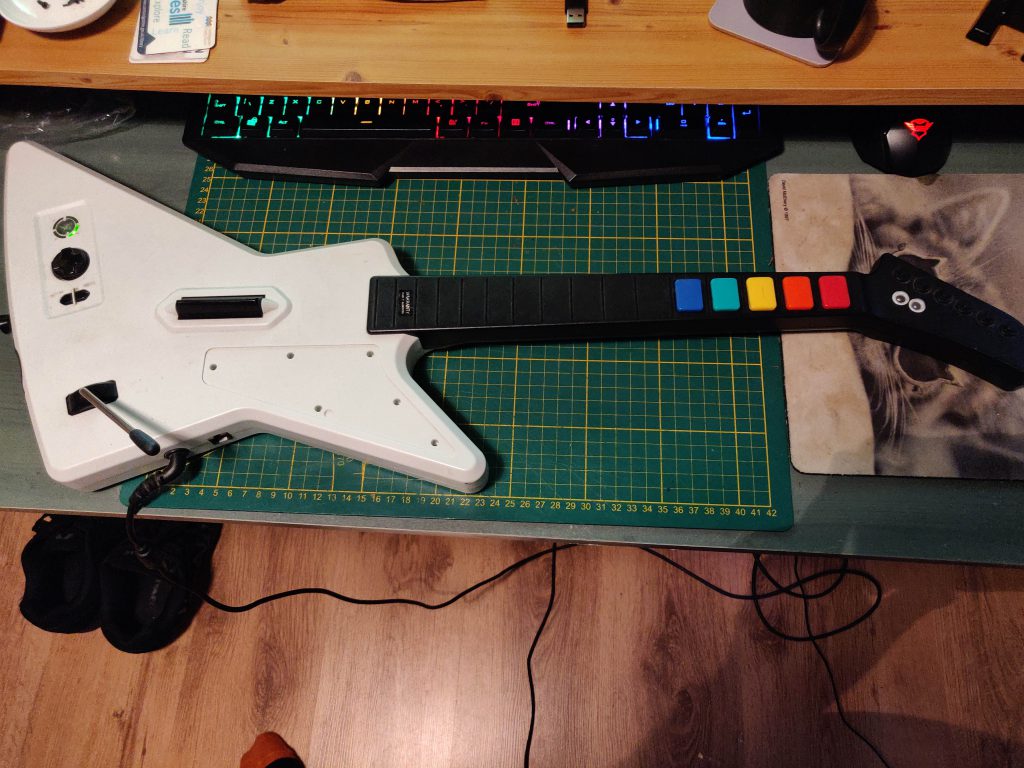 So I’m going to start with my main Clone Hero guitar, the Xplorer for the Xbox 360. This is one of the ‘meta-guitars’ for CH and honestly is my favourite. It’s a single unit, wired affair that uses the Xbox 360 ‘breakaway’ cable to connect to your PC/Console. It’s easy to use and set up, pretty much just plug and play once the driver installs.

In order to get inside, you’re going to need a simple cross-head screwdriver, preferably a smallish one. There are 17 screws in total, 16 that actually need removing to get in. The 17th (in yellow circle) is for the neck strap and doesn’t secure the neck itself, so you can safely ignore it.

I recommend removing the 11 screws from the body first, as you can remove that without removing the neck, so if you only need to get in the body, you can ignore the neck without worry. Note: if you need to do anything with the strum you’ll need to open the neck as well due to the ribbons for the fret PCB. For this, I’m going to be taking everything apart to show you the internals, so I’ll be taking them all out.

The neck is the simplest part of the guitar, so we’ll start there. Inside you’ll find the Printed Circuit Board (PCB) for the frets, the cable to connect it to the rest of the circuits, and not much else! To get the PCB off, you need a cross-head screwdriver, only a slightly smaller one. There are two small screws to remove, these can be tricky but if you keep a light but firm touch they’ll come out.

Underneath, you’ll find the rubber for the frets and the frets themselves. If you’ve ever wondered how to change the order, now is your chance. Simply pop them out and put them in whatever order you like! They’re just hunks of plastic! The black rubber nubs on the base of the fret plate are what actually makes the connection to the PCB to register your note presses.

The rubber plate could be in any number of conditions, mine’s pretty good, nice and malleable. I’ve used a pin to poke some holes in the join to make it softer and easier to press. You can also use scissors to cut the sides as well. I sadly don’t have an example of that yet, but I’ll post one when I do. On reflection a pic of the above view wouldn’t have gone amiss…

The PCB itself has 5 sets of 2 connectors to register presses, channelled to two ribbon cables. Mine look ok, but I could give them a more thorough clean with something like Isopropyl Alcohol (IPA) when I next do some maintenance.

That’s about it for the neck, be wary of putting it back together as the ribbons can occasionally get in the way of the screw holes towards the base of the neck.

The body is a very different story, I’ve circled each of the various elements for clarity:

Orange – This is an interesting one, this RJ11 port was apparently designed to be able to allow you to download additional songs for GH via the internet. EDIT – Incorrect, it was actually for an additional ‘Effects Pedal’ peripheral that I had never even heard of before! Thanks to t3hn3rd for providing the original peripheral guide for me!

Yellow – This was one that threw me off at first (as I never owned a 360), this is the headset connection, the same as you’d find on a 360 pad. I have no idea if it works on PC, I’d assume not though. I am tempted to remove it as I don’t need it, but I’m not sure if the guitar might throw a fit if I do.

Green – Here’s the whammy, it’s a pretty simple half drum mechanism with the lever on it to wiggle it. There’s also a couple of pieces of plastic and a spring to give it some tension, so be wary if you’re taking this one out. Like the strum, it’s flanked by plastic and set into the body. My whammy is a bit dodgy and seems to be permanently active. Honestly I’m not in a rush to fix it!

Blue – BUTTONS. No seriously, under this is the Start and Back buttons, with a similar rubber setup but attached to them this time. You’ll also find the ‘X’ button for 360 menus and whatnot, which caught me off guard the first time as it’s actually attached to the board. I recommend caution if you’re taking this one out. NB – When you’re using this on PC, the Player 1 light will always be on. I don’t know if this changes with multiple guitars, but I’ll update this if I find out.

So that’s more or less it for the Xplorer, I could go into more details about the boards and systems, but I think I’ve covered most of it for now. I’ll probably cover doing a full clean on Twitch, I stream every Thursday from 1830ish GMT and occasionally on others days when I have a chance. feel free to join me at twitch.tv/fireexitman

One last thing, I recently opened up an original Rock Band Fender Strat on stream, here’s all the screws and parts I took out!
Until next time,
fireexitman